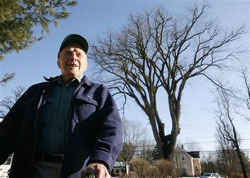 HERBIE THE ELM:  There is nothing as stately in the tree world as the American Elm, Ulmus americana. Unfortunately, there is also nothing as vulnerable. Elms that once lined Main Streets across New England are largely gone and most people today cannot even identify an elm.  This post is about Herbie, New England’s oldest elm, who, after surviving 14 bouts of Dutch Elm Disease, finally succumbed.  It is also about Frank Knight, 101, who, on a diet of beer and raw spinich, has been taking care of Herbie for the past half-century.